THE MARTYR
“The Trump Presidency”

The Martyr
A Documentary

The events and players around the world in this Greek tragedy whose central player is none other than the real estate tycoon turned reality TV celebrity turned President of the most powerful country on the face of the earth.

The players in this multi-dimensional chess game are too numerous to mention and stakes could not be higher.

Everyone knows how it all began...

Everyone has seen the 2016 video of Donald Trump and Melania in hand, making their way down the escalator into the lobby in Trump Tower in New York where Donald Trump announced his run for president of the United States of America!

Fast forward to December 2019 and no one could have imagined what was ahead for America as we turned the corner into 2020.

This documentary series gives all American the ability to take a fair and unbiased look back at how it all started, the unimaginable twists and turns throughout the year all the way through and beyond the Biden inauguration and Donald J. Trump’s second impeachment trial.

So America is now being lead by President Joe Biden. It did not take long after he took office for us all to see the differences between these two men. So it is our declared Intention through our documentary series to hold each man’s accomplishments and failures into the light.

And we pray that this story, like all Hollywood stories, ends up having a happy ending... 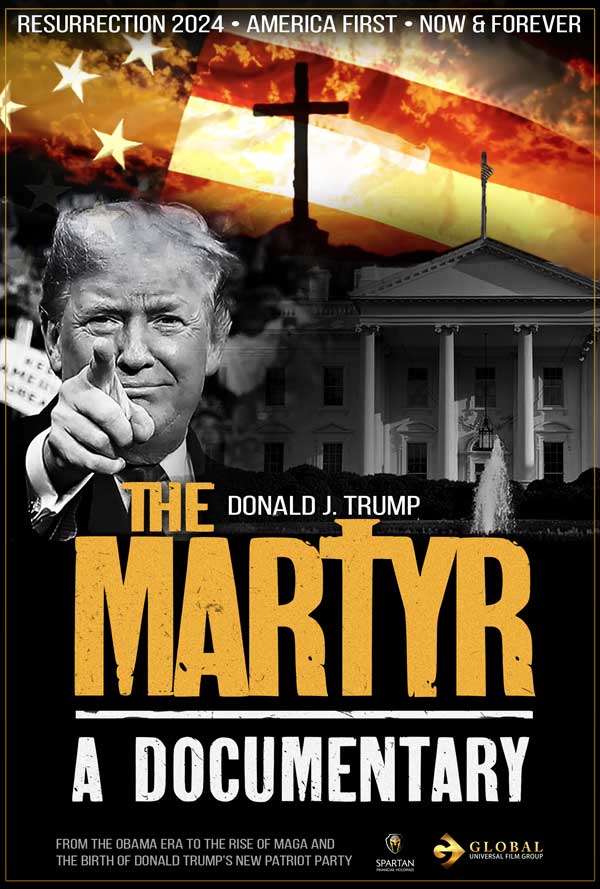 In Cooperation with Global Entertainment Holdings, Inc. (US OTC Stock Symbol: GBHL), a publicly-held company, and Global Universal Film Group, the Patriotic Republicans are producing the Eye-Opening Documentary of the Trump Presidency: “The Martyr”.

The series will dig deep into the most challenging events that have ever taken place on the American political landscape.

Everything will be explored from Barack Obama’s rise to the Presidency to Donald Trump’s second impeachment and the formation of the New Patriot Party. We will be documenting the dramatic changes taking place in the lives of Americans as a result of Joe Biden becoming President. The documentary - consisting of multiple episodes - is expected to launch in late spring.

On behalf of You and Your Family, we will always fight to Make America Great Again and to put America First.

WE NEED YOUR SUPPORT!

Contribute any amount today because Your Name has to be on the list of True Patriots who stand up for America!